The History of Harkins 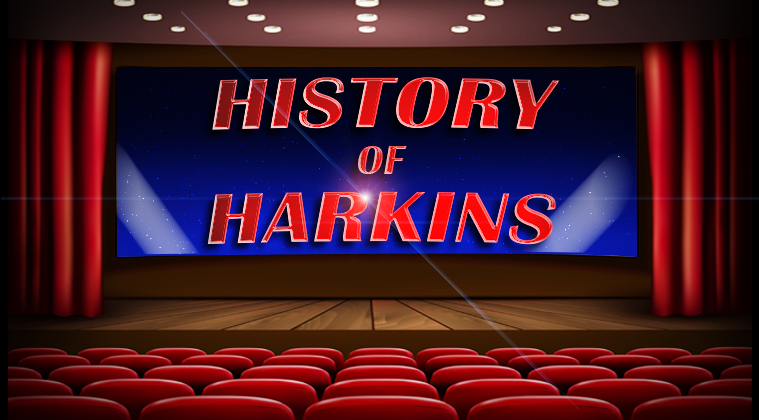 When was the last time you sat down in a theater with a big buttery popcorn and some Raisinets while waiting for that big blockbuster movie to start? It’s something we’ve all done, some more often than others. But what excitement when the lights go down and the previews come up…a night at the movies!

If you’ve ever visited a Harkins theater in the Valley, you just walked into a little piece of Phoenix history. Dwight “Red” Harkins, a Cincinnati native, got on the back of his Harley in 1931 with a dream of Hollywood stardom. Fortunately for us, he never made it to California. He spent some time in Flagstaff and then landed in Tempe still determined to pursue his dreams. So in 1933 he opened the State Theater in Tempe. Seven years later he opened the College Theater (today’s Valley Art). With many innovations, like electronic drinking fountains and head phones for the hearing impaired, he set a new standard for theaters across the country. Harkins became a household name in the entertainment industry in Phoenix. In the 1950’s he helped start the Valley’s second TV station Channel 12 and launched the first radio station to transmit multi-track sound.

After his death in 1974, his eldest son, Dan, took over the business. He took his father’s idea of innovation and looked to expand the theater chain. Now the 5th largest theater chain in North America, Harkins has 34 locations in 5 states. With upgraded facilities and state-of-the-art technology, Red would be proud of all his son has done for his legacy.