The History of Berto’s

If you’ve ever driven around the Valley you’ve probably passed multiple large yellow and red signs that serve 24 hour Mexican food with “Berto’s” in the name. You may have wondered if Roberto actually owns Roberto’s or if Eriberto is related to Humberto. The truth is probably not. We can chalk it up to good old fashioned marketing. 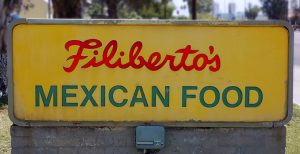 The Bertos story begins in San Diego when Roberto “Berto” Robledo and his wife opened up Roberto’s Taco Shop in 1964. It had the red and yellow sign, an extensive menu and a huge local following. Its popularity exploded which led to many imitators: Eriberto’s, Alberto’s, Aliberto’s etc.

Years later, the Tenorio Family decided to open their version of 24-hour Mexican food in San Diego in 1988. It was aptly named Filiberto’s, after one of the brothers in the family. They stuck with what worked- lots of menu options, brightly colored sign and, of course, the name. They expanded to Arizona in 1993, opening up the first Filiberto’s in Mesa. And so the tradition began in the Valley. The company is headquartered here in Phoenix and is still run by many of the Tenorio family. They proudly maintain that they were the first Bertos here in the Phoenix metro area.

The next time you stop for some late night tacos or a combo plate at your favorite Berto’s, enjoy it knowing you’re supporting a local business, even if it’s not an official Berto’s brother.